A new year, A new January 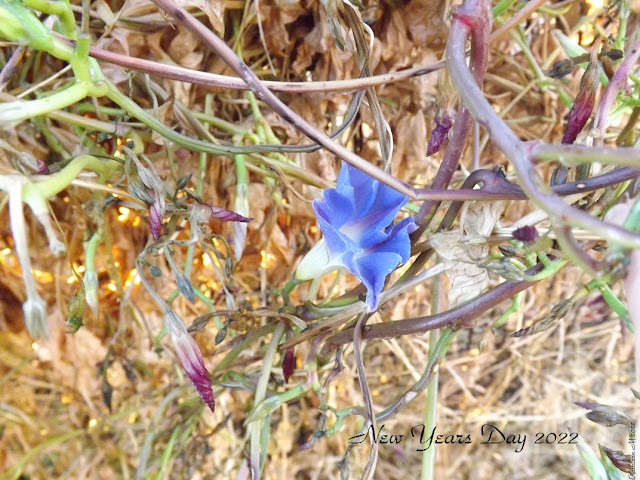 January arrived to us so different than just one year ago. The year's first day had
a blue morning glory blooming on the fence and greeting Sophie and I on our
early morning walk. 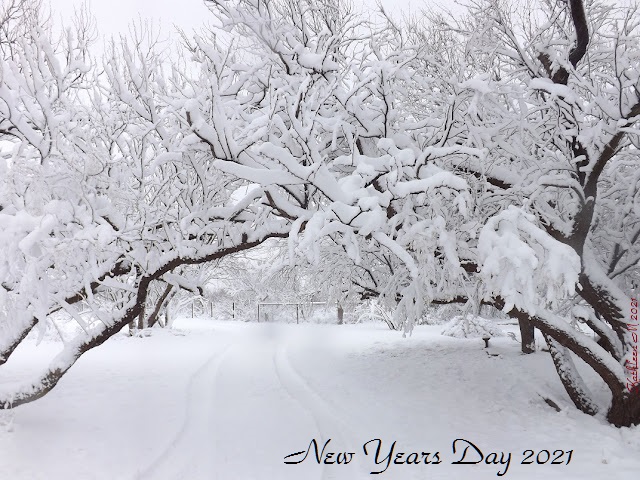 Last year found us knee deep in snow and in the middle of a snowball
fight with my grownup sons.  Snow has a magical way of bringing the kid
back to us all.........doesn't it?
We have had such a wonderful long lasting
fall.  Autumn and I have become such close friends and I am going to miss her dearly!
She left us with the most lovely sunset  before January made her arrival. 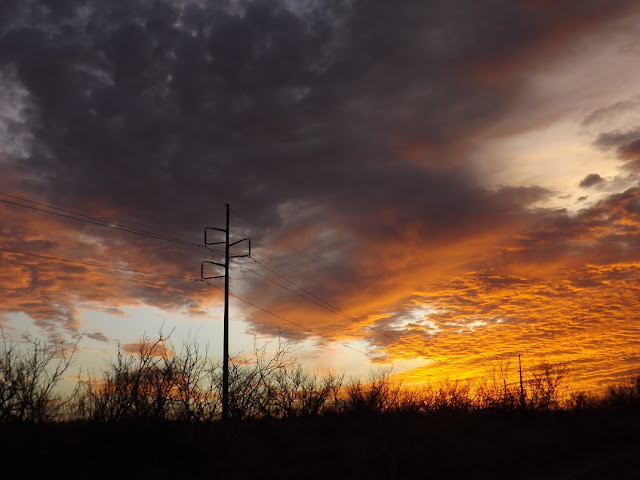 As much as I will miss fall, January is a good month to allow me to get much needed things done outside. 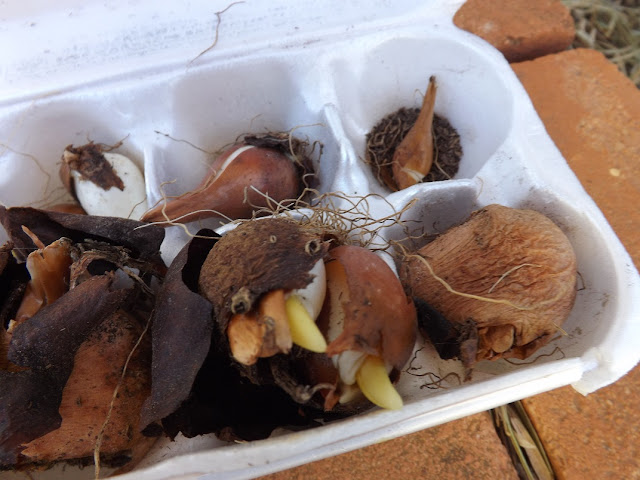 I was thrilled when I pulled my bulbs out of storage to find them healthy and
already sprouting....ready to be planted in their containers.
If you plant tulips, iris, daffodils, or other plants with bulbs, you can save the
bulbs for the next fall planting.
After your flowers have faded and the leaves turn brown and are ready to drop off, dig up your bulbs. 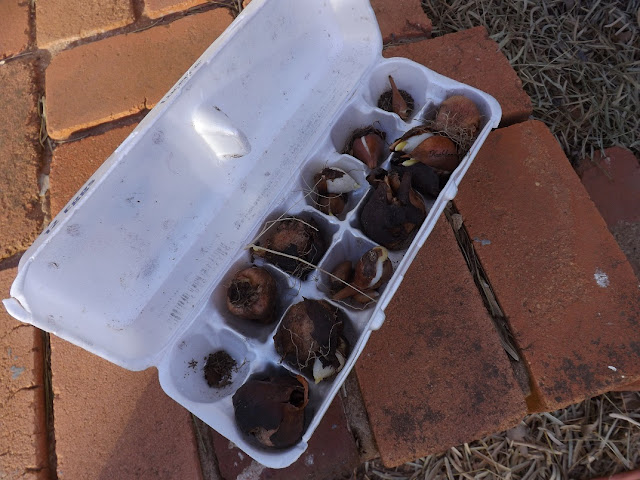 Gently brush off any excess dirt.  I store my bulbs in Styrofoam egg cartons.
This keeps each bulb separated and allows them enough air.  You can choose what works best for you and you can research and find answers on the internet.
Store your bulbs in a cool, dry, dark, place.  I used a hallway top closet shelf.
When it is time to plant, your bulbs should be healthy and ready. 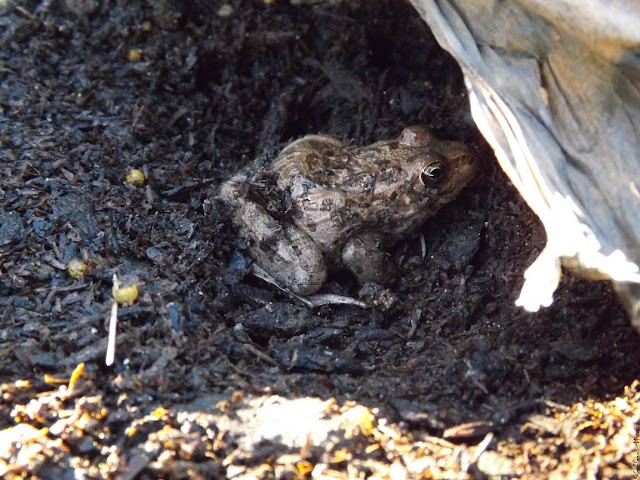 I plant my bulbs into galvanized pails and containers and place them into the greenhouse to ride the winter through.  I have to plant them this way to keep the bulbs safe from hungry bulb eating wildlife A shed is also a good place to store your bulbs if you choose containers over outside planting.  In getting my containers with the soil waiting and ready for planting,
I found a garden visitor who was thinking this would be a great winter home.
I took it to the pond area where the other froggies stay.
There is much more that needs to be done outside when the days are mild and warm, but for now, the chill of these January days finds me happier to stay inside with the comfort of a crackling fire, a comforting chair, and a sharp needle to stitch the hours away. Are there any outside
activities that you enjoy during January? What do you enjoy doing when you decide to stay inside?
As I place a new calendar on the wall........I wonder.....who decided that this month  would be called........January??........and
if I really think about it.......too long.......January sounds like such an odd name.
Many of you already know where this name came from, but for those of you who do not, here is just a bit of history.
January was named for the Roman god Janus, known as the protector of gates and doorways who symbolize beginnings and endings with it's original Roman designation, Ianuarius, the Saxon term Wulf-monath (meaning "wolf month") and Charlemagne's designation Wintarmanoth ("winter / cold month").  Janus had two faces so he could see the future and the past. The Roman calendar originally began in March, and the months  of  January and February were added later, after a calendar reform.
The  birthstone for January is garnet. The word “garnet” comes from the 14th century Middle English word gernet, meaning “dark red.” The word is derived from Latin granatum, which means “seed,” and is called so because of the gemstone's resemblance to the red seeds of the pomegranate. As the birthstone for January, garnet is said to bring love, luck, health, loyalty and friendship to people who are born this month. It is also the gem that married people traditionally gift on their 2nd and 18th wedding anniversary. 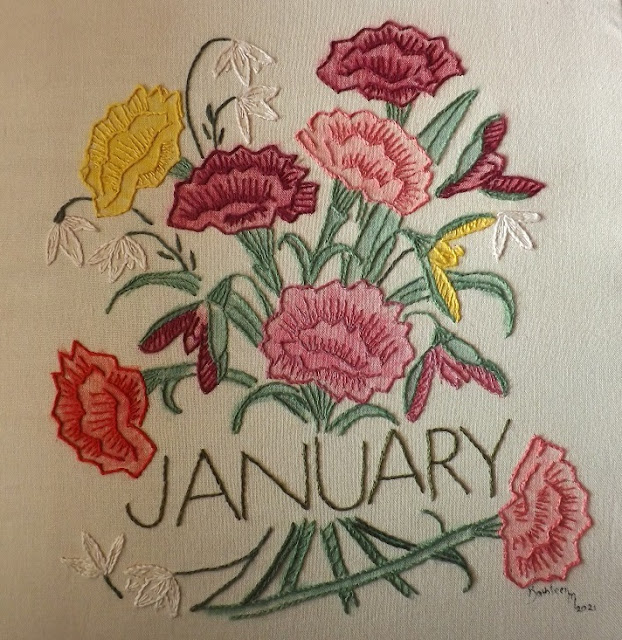 The January month birth flower is the Carnation & Snowdrop.  The reason and meanings of these flowers I have posted on my embroidery blog.  If you would like to visit .....here is the link
Yesteryear Embroideries
I hope this new year for you began with much goodness and peace and I hope it remains that way
throughout the rest of the  year!

What a difference in January 1st last year and this January! Amazing pictures! We have had such warm weather lately. High 60s and 70s all during December. It reached 77 degrees a couple times. A cold front is coming through tonight and tomorrow and is supposed to drop the temperature drastically...like in the 20s. I found a cabbage plant growing in the compost bin. Dug it up and put it in a pot inside the greenhouse. Hope it lives. I will most likely sew more with the winter weather coming. Want to make more sunbonnets and gardening aprons. Wishing you a very Happy and healthy New Year.

How beautiful that embroidered piece that you made for January. I'm amazed that you have a Morning Glory blooming!! Although the picture you posted of January 2021 is calendar-worthy. Here the temperature has been below freezing for weeks but hopefully soon that will change. I bought 3 fat Amaryllis bulbs this morning ( at the hardware store), they were 75% off. Also some Paperwhite bulbs. I want to plant all the bulbs in pots but first I have to wait until the potting soil that I had outside thaws out.
As I wait impatiently for warmer weather I'm trying to get my house organized so I'll be free to putter outside once I can.
I hope 2022 will bring you good things. GM

Prims By The Water said...

I dont remember what the weather was like last January here in Michigan, bur we got a snowstorm this year. What a beautiful morning glory. My favorite color too! Happy New Year! Janice

Happy New Year! How amazing to find that morning glory still blooming, but I fear you are in for a real chill soon. I noticed this morning that the paperwhite I planted last year in one of my courtyard tubs is now up! It was finished blooming and I stuck it into the stock tank, not really expecting it to take being roasted at over 100 for 3 months, but somehow it lived. I have a lot of other bulbs planted that had been kept in the fridge until a month ago. I like your handsome froggie! Now he or she needs to squish down in the mud and wait until spring proper! I don't much like the severe cold, but I still try to go out to the botanical garden during the cold. Soon enough it will be scorching hot here again.

We put up plastic sheeting to keep the chicken run and the patio from getting too much of the freeze forecast here for tonight. I was up very late last night putting potted plants into the greenhouse. Hopefully all will survive to bloom again another day. We HAVE had a wonderfully long Autumn. I have enjoyed it mightily! The yellow angel trumpet is blooming like wild for its swan song for the year. Looking forward to seeing what the Spring will bring, aren't you?
Love that sunset!

Happy New Year~ I did not know that about the garnet. I do like pomegranates though. As kids, we would sit on the tailgate and eat them holding them out so the excess juice would go to the ground and not on us as it stains. I'm sure this was Ma's attempt at keeping us from looking like orphans - didn't work 😁

What a difference a year makes for sure, Kathleen, and we were hoping to have a bit of snow by now, but sadly not. Today's temperatures are in the 20s and will rise to mid 40s by mid-week with a forecast of snow, a few inches, by Friday. Your bulbs look to have survived well in the egg cartons. When we had our home and yard, I never resurrected any bulbs; that said, some did survive on their own and re-bloom the nest year.

This is very interesting about how January got its name. This is good advise how to store your bulbs. I hope this January will be real good for you.

I hope your new year is off to a great start. Last year was a year of extremes, for sure. The snow storm in February was a dandy. I am afraid I may have lost some seedlings that had been fooled by the late fall warmth. They didn't take the hard freeze very well. Thanks for the tip about egg cartons for storing bulbs.

Happy New Year! If I go outside I do some walking but its not been enough. Its been too cold for me actually. Inside I watch TV, got to indoor meetups. Usually with food involved. I spend time on the computer. 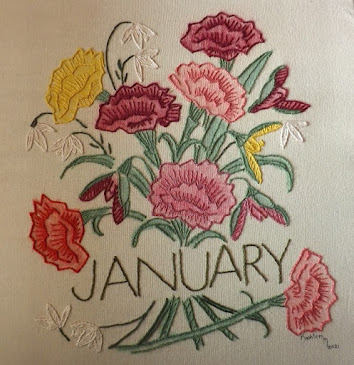