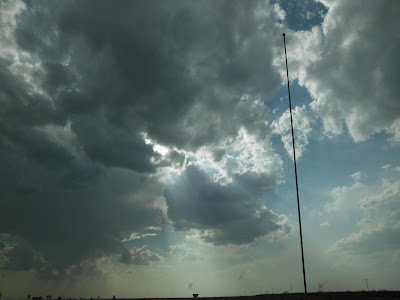 making myself completely forget and almost give up doing what I love to do the most. The whole reason I convinced my husband that country living was the thing to do...........
I was allowing "the ways of the current world" scare me out of. 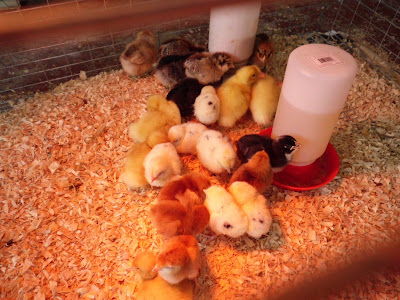 So today, I went to town, completely armed with my pet carrier and scooped up handfuls at a time of these fluffy and chirpy little ones. 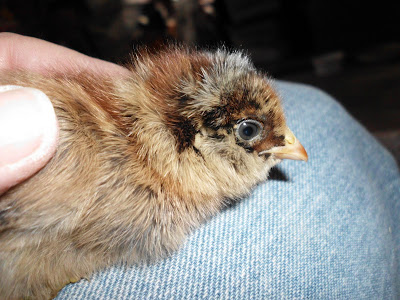 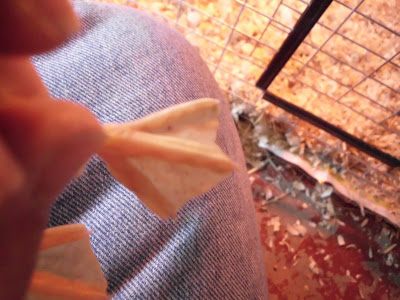 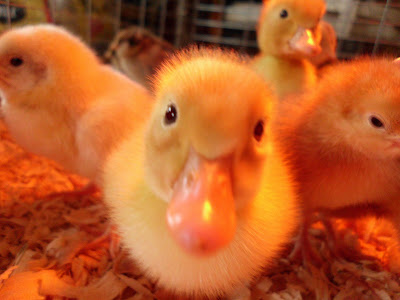 Let me ask............how in the world could I resist this??
My whole dream has been to raise a family, live out in the country and raise lots of chickens and ducks..........and what ever else might come along.
And yes, hard times are near and far.........all around and all across the country. But I can't put off living the happiness of today in fear of what will happen tomorrow...........I know that is something the Lord does not want us to do.
I have decided to work at making my dreams come true.................until the hard times come..........when they do...........I will just lean on the Lord and work through them as best I can.
How about you? Are the struggles and the worries of the world slowing you down to run the race of what you love to do? Are you putting things on hold............until a better day?
Or are you jumping in with both feet and living life to the fullest?
I would love to hear.
Posted by Eggs In My Pocket at 11:24 AM 26 comments: 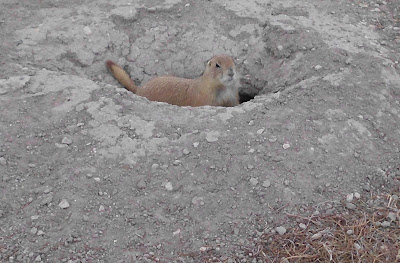 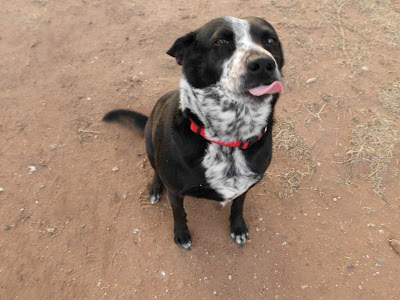 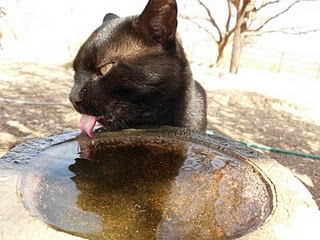 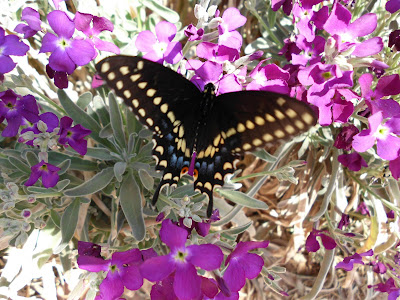 her purple floral dress with butterflies. Her bags are packed full of pumpkin and flower seeds to sprout...............her pet birds of every kind are singing in my trees! I think she placed a cottontail bunny in my yard!
What has spring brought to you? I would love to hear!

Fire swept across the prairie 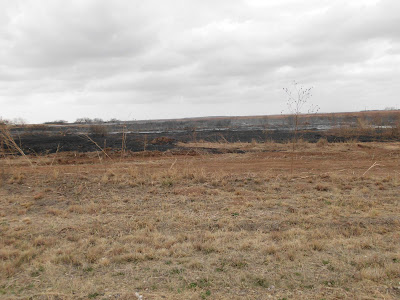 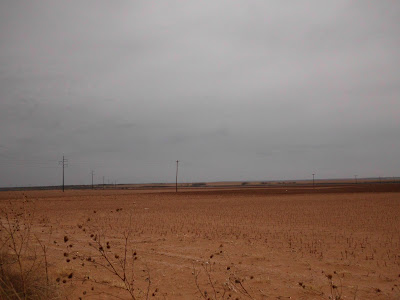 Thank goodness for the farmer's cotton field. It lay between our land and the land that caught on fire.
That term I have always heard.................(Support your local fire fighters)............it's not just a phrase for the bumper sticker.........it's something that I truly hold as an important phrase and something that needs to be done. They were out in all of the fire and the pitch black night..........making this country life peaceful once again. 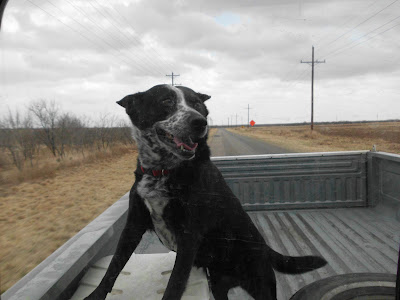 Sophie has a smile on her face, as much as we do now.
Hope this is finding you safe from fire, floods and storms. 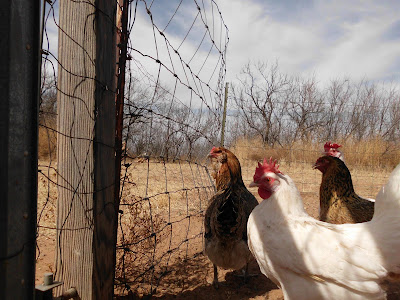 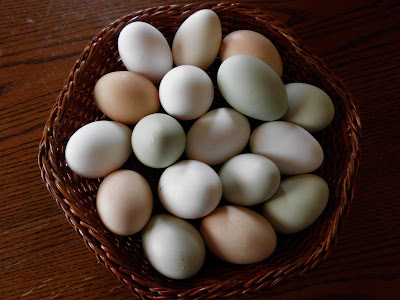 I step out and instantly,

the fragrance of the heavy blossomed Stock flower 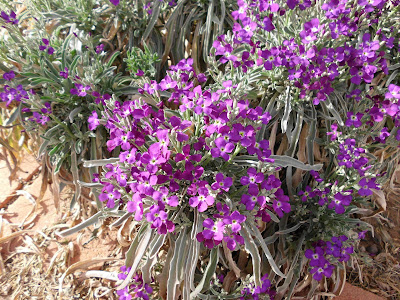 gets my attention and greets me in the new day. It's vibrant purple blossoms sway in the breeze ...............a gentle breeze, that will soon become hard blowing and full of dirt by mid day. However, this is one tough Texas lady as she survives the drought and the harsh winds hanging on to her petally blossoms. 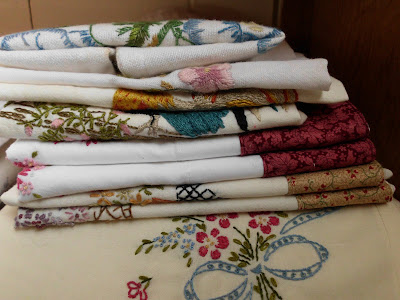 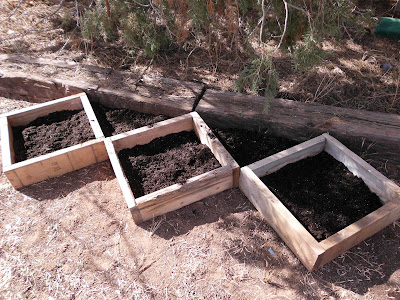 With the warm spring weather , I am busy getting things done outside. Flower beds are clean and ready and new flower beds are in the making. Mice attacked in the greenhouse and ate all of my pumpkin seed that I had just planted..........so another week to exterminate them and then time to replant. 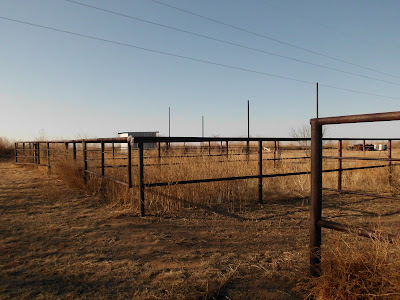 Always, always there is brush and weeds to clear. There is so much ,it seems ,this year and it has taken up much of my early morning. But with each cleared space, there is a blank canvas for flowers and pumpkins to grow! Hopefully by now, you are experiencing signs of spring?
What are your plans for this coming growing season? Do you have lots of things to clear away.......or perhaps you are ready to start growing? I would love to hear!

is still just as hard packed as it was yesterday, before the rain last night, although the much needed moisture soaked the land well. 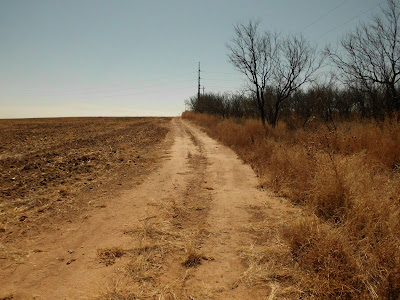 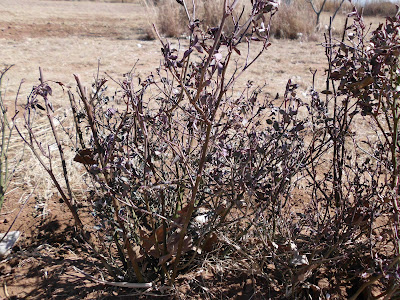 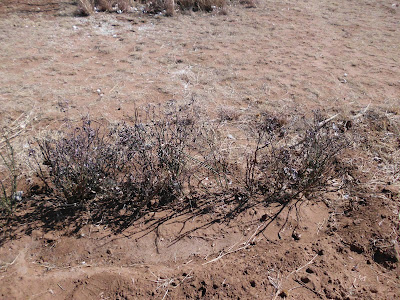 thanks to a couple of dear friends, Jane and Mary, who dug it up........hard work..........thank you Jane, and brought it home to me. In all of the years of my garden experience, I had never heard of this wonderful plant and am quite delighted to have it come live here on the grounds. It is now making itself at home in the flower garden that I have been working on in the past couple of years.
I have been adding various perennial plants to make a natural fence line to the garden. One long side of stock flower, the front entrance lined with Italian Jasmine, the front walk with a welcoming pink and yellow Lantana, the back with a crate of climbing roses...........and now this to fill in the gap between. If it does well............which my friends guarantee..............that even I and the harsh climate can not kill ...................I will as the years go by, transplant cuttings from it to add to the other long side............thus, completing my natural fence. 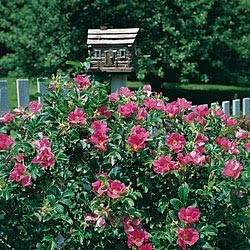 This is how it is supposed to look, if it decides to stay here.........(photo borrowed from a garden website). I was quite surprised...........after some research, that it is not an American beauty at all, but actually Asian. Here is the information on the sturdy and durable rose plant..............
It just shows, how different things can be when researched..

Rosa rugosa
"Hamanasu" redirects here. For the Japanese train service.
Rosa rugosa (rugosa rose, Japanese rose, or Ramanas rose) is a species of rose native to eastern Asia, in northeastern China, Japan, Korea, and southeastern Siberia, where it grows on the coast, often on sand dunes.
It is a suckering shrub, which develops new plants from the roots and forms dense thickets 1–1.50 m tall with stems densely covered in numerous short, straight thorns 3–10 mm long. The leaves are 8–15 cm long, pinnate with 5–9 leaflets, most often 7, each leaflet 3–4 cm long, with a distinctly corrugated (rugose, hence the species' name) surface. The flowers are pleasantly scented, dark pink to white, 6–9 cm across, with somewhat wrinkled petals; flowering is from summer to autumn (June to September in the northern hemisphere).
The hips are large, 2–3 cm diameter, and often shorter than their diameter, not elongated like most other rose hips; in late summer and early autumn the plants often bear fruit and flowers at the same time. The leaves typically turn bright yellow before falling in autumn.
Cultivation and uses
Rugosa rose is widely used as an ornamental plant. It has been introduced to numerous areas of Europe and North America. It has many common names, several of which refer to the fruit's resemblance to a tomato, including beach tomato or sea tomato; saltspray rose and beach rose are others.
The sweetly scented flowers are used to make pot-pourri in Japan and China where it has been cultivated for about a thousand years.
This species hybridisis readily with many other roses, and is valued by rose breeders for its considerable resistance to the diseases rose rust and rose black spot. It is also extremely tolerant of seaside salt spray and storms, commonly being the first shrub in from the coast. It is widely used in landscaping, being relatively tough and trouble-free. Needing little maintenance, it is suitable for planting in large numbers; its salt-tolerance makes it useful for planting beside roads which need deicing with salt regularly.
Numerous cultivars have been selected for garden use, with flower colour varying from white to dark red-purple, and with semi-double to double flowers where some or all of the stamens are replaced by extra petals. Popular examples include 'Fru Dagmar Hastrup' (pink, single), 'Pink Grootendorst' (pink, semi-double), 'Blanc Double de Coubert' (white, double) and the more common 'Roseraie de L’Haÿ' (pink, double), which is often used for its very successful rootstock and its ornamental rose hips.

Are any of you familiar with this plant. Do you like it? Do you have photos of it?
I would love to hear! 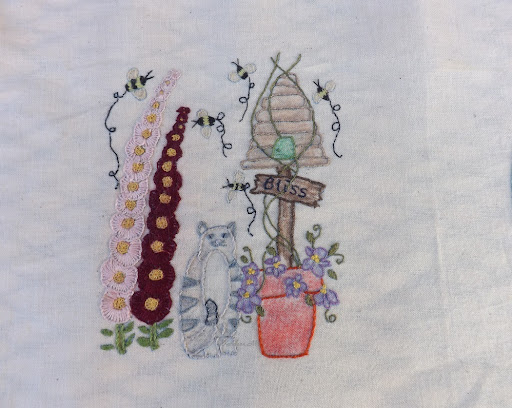