(don't be alarmed..........it's not a horror blog post)
which now has been taken over by pumpkin vines and brightly blooming zinnias. 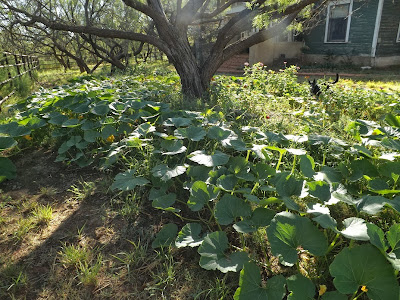 If you look to your right, you can barely see Sophie as she romps around in the thick growth.
I had only meant to have a small patch of pumpkins in the front yard so that I could look out in between my writing and enjoy the view. I did not think that they would take off and grow this well. Of course I really enjoy the view now......... 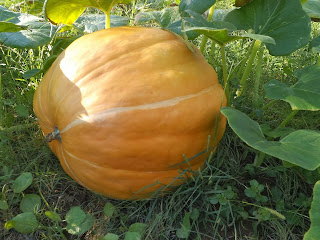 A few posts back I showed you this pumpkin, which at that time was 49 inches around. I have watched it grow and have been so delighted with it, that I have had a hard time deciding about cutting it..........however, more pumpkins are wanting to grow, so with the knife, I cut it from the vine. 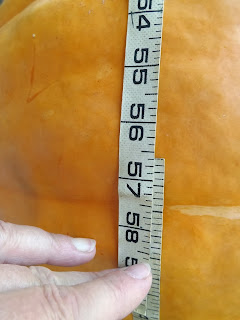 It was so large and heavy that I struggled getting it to the front porch. It reached 56 1/2 inches around and weighed 62 pounds! 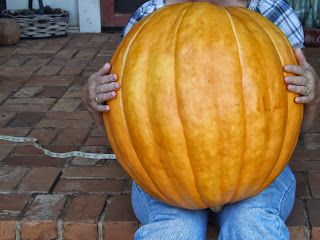 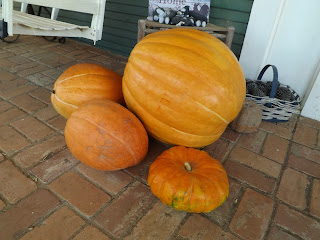 It is so big that it makes my regular size pumpkins look like miniatures.
I've been asked by friends and family about what I plan to do with it.
I am not going to carve it. I am just going to enjoy looking at it on the porch.  I am sure there is a lot of good pumpkin inside of it  that could be cooked down for pies ............but I will do that with my other pumpkins.
When the large pumpkin finally gets wilted down towards late fall, I will take out the seeds and keep them for next year's planting.
In fact, I think I won't have grass in the yard any longer.................
I think I will have a pumpkin patch instead.
﻿
Posted by Eggs In My Pocket at 12:38 PM

Think about it! You can never have too many pumpkin pies! I didn't get any this year. sob :-{{

Wow! You really do have a green thumb or should I say orange?

I love your idea of growing pumpkins in the yard. Yours sure did well. The large one is just perfect. Way to go.
Have a great evening.

My goodness, Kathleen, that is huge!! I don't know how you got it to the porch. A pumpkin patch like yours would make Linus very happy since he is always looking for the Great Pumpkin. *giggle*

What a great Pumpkin..I had a nice one one year and didn't want to cut it so I put a cowboy hat on it and drew a face on it with a marker. It turned out pretty awesome and looked great for a long time and if I got tired of looking at it I could turn it around but I never did. Let us know if you decide to do anything with it. It is pretty awesome. Maybe I will try and plant some again next year..Thanks for sharing :)

What a fantastic patch you have. Your prize punkin is perfect. Yes, do keep seeds for next year. Love the front yard full of vines.

I don't blame you, Kathleen! If I thought I could get away with it, I'd grow pumpkins in my front yard.

that is one beautiful pumpkin from color to the size. That patch sure loved that spot where you planted it. Good luck growing even larger pumpkins.

Your pumpkin patch is grand !
Rose

What a wonderful way to fill your front yard! They're beautiful and they don't have to be mowed, either!

WOW!! What a pumpkin! Are your pumpkins not bothered by beetles? We can barely get them past blooming stage here before they're attacked. Do you worry about snakes among the vines?

That's an amazing pumpkin, Kathleen! So pretty! I'm so happy for you that your pumpkin patch is doing so well this year. :-)

I hope you have a great weekend!

And what's not to like about having a pumpkin patch in the front yard, Kathleen? And your thought of just enjoying that large one is a good one because you have others to carve out for pies, breads, etc . . . Pumpkin soup is a favorite of mine.

I think a pumpkin patch front yard is an excellent idea. That is sum-punkin!

A pumpkin to be very proud of!!

Wow, Kathleen! That is SOME Pumpkin!!! It's beautiful! Is there a fair where you can enter it?

What an awesome pumpkin patch. You sure have a green thumb. I can imagine these would make wonderufl pumpkin pies. You could also make some great Jack-O-Lanterns with these huge pumpkins. Awesome photos!

hi, Kathleen! it's been a while I visited your blog and this one too :) I am astonished by the pumpkin you grew! amazing!you are right, it is best as a porch decor :) lovely!

YESTERYEAR EMBROIDERIES come see what is being stitched! 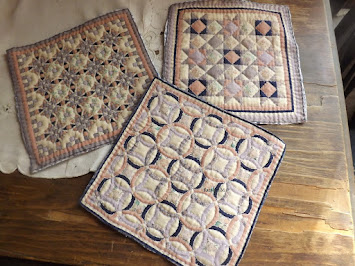